So, I’m late to this, but I finally sat down and had a proper read of Benjy Kahan’s 2013 book Celibacies: American Modernism and Sexual Life.[1]Benjamin Kahan, Celibacies: American Modernism and Sexual Life (Durham: Duke University Press, 2013).
What strikes me especially about it is that I think it’s the first work of criticism I’ve read that really makes me appreciate the promise of “surface reading.” Anyone who knows me probably knows I’m wholeheartedly #teamdepth, not because I love the depth/surface binary in particular but because so much of what’s out there about surface reading and the “postcritical turn” seems dedicated to caricaturing some of the most powerful and interesting criticism of the last several decades and reducing them to some kind of find-the-hidden-code exercise where you line up all the puzzle pieces and the answer is—aha!—a kitten!

Hopefully nobody actually thinks that about critique and we’re all just trying to make a point. Eve Sedgwick does a beautiful job of pointing out the tendencies of “paranoid” reading without erasing its generativity.[2]Eve Kosofsky Sedgwick, “Paranoid Reading and Reparative Reading, Or, You’re So Paranoid, You Probably Think This Essay Is About You,” In Touching Feeling: Affect, Pedagogy, Performativity, … Continue reading I especially appreciate Sedgwick’s demurral at making “paranoid reading” (a potentially very pathologizing name) about a critic’s unsuitable emotions or state of mind.

Still, the temporalizing effect of the “postcritical” hints that old-school (so to speak) critique is over, not so much wrong as behind the times—it’s not “the way we read now,” to quote the title of the special issue of Representations in which Stephen Best and Sharon Marcus most famously advanced the idea of surface reading.[3]Stephen Best and Sharon Marcus, “Surface Reading: An Introduction,” “The Way We Read Now,” spec. issue of Representations 108, no. 1 (November 1, 2009): 1–21. … Continue reading Or at least, it’s not the way we should read now. Paranoid reading is proper to the paranoid 80s and 90s, it’s suggested; the criticism of our time must be different.[4]This is why I called dibs on the title “Nobody Cares What You Believe: The X-Files Reboot and the Postcritical Turn.”

I’ve argued elsewhere that what we think of as “surface” in the reading that we have produced as contemporary has everything to do with what people thought reading was a hundred years ago, so, okay, I have a little bit invested in the alleged contemporaneity of certain reading practices.[5]To clarify: my point is not the boringly true one that people did plenty of reading “at the surface” before now, but rather that contemporary surface reading owes a specific debt to early … Continue reading

What Celibacies does differently is show why attending to the surface need not be an ascetic renunciation of interpretive richness at all—just as celibacy itself need not be an ascetic renunciation, although sometimes it is that too.[6]I think it would be interesting to spend a little time with surface reading’s languages of ascesis in light of Kahan’s reframing of celibacy. (Benjy: guest blog??) 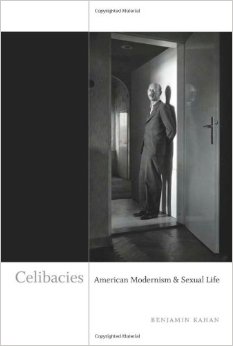 Celibacies sets out to question what Kahan, after Foucault, calls “the expressive hypothesis.” If, for Foucault, the “repressive hypothesis” is an erroneous belief that sexual expression has been repressed by social convention (when in fact those very social conventions around sex are an incitement to speech that produces sexuality as a category), “we still have not fully grappled with the immense challenge that the repressive hypothesis poses—namely, how can sexuality studies avoid positioning itself opposite silence, repression, and power?”[7]Kahan, Celibacies 3. The expressive hypothesis is another version of the repressive hypothesis: the expectation that every closet will contain a queer (who could, and probably should, be “expressed”—”come out”). The expressive hypothesis forgets the potentially liberatory possibilities (or complex liberal compromises, in some cases) of not saying, not doing, not choosing, not identifying. Hence the epigraph that Kahan chooses for the monograph, from Sedgwick’s Epistemology of the Closet: “Many people have their richest mental/emotional involvement with sexual acts that they don’t do, or even don’t want to do.”

Is it a cover for queer sex? Is it a positive sexuality in its own right? Is it a repudiation of sex? Is it a woman’s regretful renunciation in exchange for rights she could not have under marriage? Is it a queer route to normative citizenship or religious belonging? Is it a lie?

The importance of reframing the expressive hypothesis comes to the fore in Kahan’s exploration of celibacy’s specific purchase on the social sphere, contra what Michael Warner calls “the deep and resilient moral fantasy…that reproduction is essentially generous,” which leaves the celibate “estranged from reproductive sexuality” and “from life itself.”[10]Michael Warner, “Irving’s Posterity,” ELH 67, no. 3 (2000): 774, quoted in Kahan, Celibacies 54. “Whereas most sexual formations are associated with private interests (even as they have public elements),” Kahan argues, “celibacy is associated with the public good. …[C]elibacy is not just a public identity, but one that motivates (rather than merely instrumentalizes) styles of and performances of publicness.”[11]Kahan, Celibacies 19.

Briallen Hopper’s recent, brilliant essay on spinsters brings into relief how truly social the celibate’s alleged unsociability is, and how necessary a lingua franca of celibate sociality is in the present moment:

There are urgent reasons why spinsters need to look beyond the self and resist the system. As [Louisa May] Alcott’s insistence on the ballot box [in An Old-Fashioned Girl] suggests, insofar as the conversation about unmarried women remains a conversation about choice and individual temperament and not about politics, it is missing something important. Even though the contingencies of when and whom I marry don’t define my existence, marriage is still an important legal and social category with implications for many practical and symbolic aspects of adult life. Because in our culture, marriage is a choice, but it also isn’t. It’s a rom-com ending and a party with a cake, but it’s also a systemic mechanism that separates the enfranchised from the disenfranchised, the included from the excluded.

And unfortunately, the momentous Obergefell v. Hodges SCOTUS decision remedies some of these injustices while shoring other injustices up. In too many important ways, marriage and the couple form are still the legal and social prerequisites for the sharing of resources and lives, the care of sick, the parenting of children. And this arbitrary conflation of marriage with the commitments and responsibilities of adult life sometimes turns unmarried people into second-class citizens, and devalues many necessary forms of love.

In order to recuperate these “many necessary forms of love,” it’s important to be able to read the “celibacy plots,” as Kahan calls them, that run orthogonally to the marriage plot. (In one of the book’s best moments, Kahan reads Andy Warhol’s 1965 film My Hustler as portraying “cockblocking as a celibate act that is both auto- and alloerotic.”)[12]Kahan, Celibacies, 133.

As Mark Goble points out in Beautiful Circuits, the scandal of modernist celibacy is actually its surface reading: “Has Gertrude Stein a secret?” Goble asks, citing the title of the psychologist B. F. Skinner’s Stein exposé in The Atlantic.[13]B. F. Skinner, “Has Gertrude Stein a Secret?” The Atlantic Monthly 153, no. 1 (January 1934): 50–57. “The answer is of course ‘yes’ and by the way, it’s not about sex.” Instead, it’s about Stein’s history of experiments in automatic reading and writing.[14]Mark Goble, Beautiful Circuits: Modernism and the Mediated Life (New York: Columbia University Press, 2010): 128.

But the scandalous thing that is “not about sex,” as Celibacies makes beautifully clear, is precisely pluripotential because it remains on the surface—it’s a sexual yes, yes, yes, yes, yes, yes, polymorphously perverse in its denials—of authorial subjectivity, of mind’s supremacy over body, of writing’s “value.” I’ve argued that women’s information work, such as typing (and Kahan notes that when such work was done professionally, it was inevitably by the unmarried, although, as my essay explores, this overlaps with married women’s domestic labor), prototypes the kind of compromised reading that has come to be seen as “the way we [should?] read now.” [15]Kahan, Celibacies, 15; Cecire, “Ways of Not Reading Gertrude Stein,” ELH 82, no. 1 (2015): 281-312.

Here’s an example from Stein’s Autobiography of Alice B. Toklas that lets us see what “celibate” surface reading offers:

Etta Cone offered to typewrite Three Lives and she began. Baltimore is famous for the delicate sensibilities and conscientiousness of its inhabitants. It suddenly occurred to Gertrude Stein that she had not told Etta Cone to read the manuscript before beginning to typewrite it. She went to see her and there indeed was Etta Cone faithfully copying the manuscript letter by letter so that she might not by any indiscretion become conscious of the meaning. Permission to read the text having been given the typewriting went on.[16]Gertrude Stein, The Autobiography of Alice B. Toklas, in Writings, 1903-1932: Q.E.D., Three Lives, Portraits and Other Short Works, The Autobiography of Alice B. Toklas, ed. Catharine R. Stimpson and … Continue reading

The propriety of Etta Cone’s refusal to read—her Baltimorean “delicate sensibilities”—is exactly the same thing as its perversity. Celibacies elaborates the logic that locates propriety and perversity the same depthless act.   █

[I did actually try to come up with a title that wasn’t also a filthy double-entendre but failed. Paranoid reading: still the way we read now.]

My essay “Ways of Not Reading Gertrude Stein” is now out.

In Autumn 2021 I will be visiting New York, New Haven, Philadelphia, Baltimore, and Washington, D. C. for research.