Robin James‘s recent book Resilience and Melancholy: Pop Music, Feminism, Neoliberalism (Zero Books, 2015) isn’t a perfect book, of course. But its theorization of resilience for the age of branded feminism is refreshing and crucial. We need this book.

James uses “resilience” to grapple with the ways that neoliberalism makes use of trauma, and assents to conditional female and multiracial power, but only as an alibi for capital. She’s thus able to confront an uncomfortable, because extraordinarily dangerous, aspect of neoliberalism: the ways in which wielding the language of race and gender critique can garner certain provisional varieties of authority and even celebrity. In the world of Kung Fu Spiritual Bollywood Satires Based on Children’s Books Set in Europe For Hopeless Romantics Directed By Alan J. Pakula, where it’s market niches all the way down, certain kinds of feminism (especially white)—and racial justice—sell. A lot. And this fact of the market then provides an alibi for patriarchy and white supremacy: aren’t we past all that?

That certain kind of feminism and racial justice, James argues, is the resilient kind, the kind that is set back but spectacularly overcomes. Yes, the deck is stacked against you, Sheryl Sandberg acknowledges, but she has a book about how to “lean in” because after all, she overcame. Her face smiles warmly at you from the cover. James further points out that this narrative of overcoming usually involves the scapegoating of already abjected groups for the obstacles that have been overcome, usually men of color, immigrants, and the working class. (Jamal in Empire, clad in white, spectacularly performs resilience by coming out as gay in a public performance, against his father’s protestations that “the black community” won’t accept a gay singer. “The black community” is clearly a proxy for Lucious’s own homophobia, but its repetition still works to scapegoat black people for anti-gay sentiment, even as the camera shows friend after friend nodding respect to Jamal and assuring viewers that he has in fact overcome.)

Tina Fey’s new Netflix comedy (market niches all the way down!) Unbreakable Kimmy Schmidt [pilot], with Ellie Kemper in the title role, is literally and specifically about the spectacle of female resilience. Its theme song doubles as a viral video, a neighbor’s interview about the discovery of four women kept captive by a cult leader in an underground bunker, lovingly hand-autotuned by the Gregory Brothers, of Bed Intruder fame. The repeated refrains of the song are “unbreakable” and “females are strong as hell.”

The victims’ racial coding is also pointed up visually: the news report in the pilot announces “WHITE WOMEN FOUND,” with “Hispanic woman also found” in smaller letters below. It’s a joke about racist media, but it’s also a canny acknowledgment that the spectacle of overcoming is primarily the domain of white femininity.[1]Donna Maria (Sol Miranda), the hispanic captive, isn’t outside resilience either, though; she starts promoting her own Mole Woman molé sauce (hilariously, a banner ad for it appears on the … Continue reading 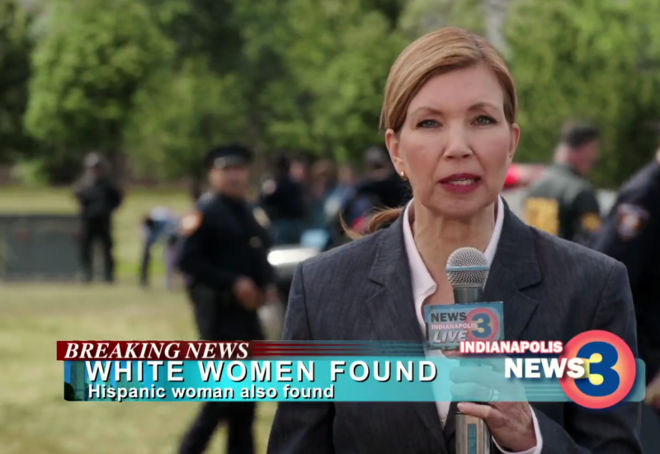 In the last two episodes of the season, the viral star of the theme song video, Walter Bankston (Mike Britt) returns to warn Kimmy’s fame-hungry roommate Titus (Tituss Burgess) about the price of viral fame, pointing to the show’s awareness of resilience’s spectacularity. In fact, throughout the season, Titus struggles to see Kimmy’s experience as anything but a media spectacle, explaining:

When it’s finally time for Rev. Richard Wayne Gary Wayne (Jon Hamm) to be tried for kidnapping and holding Kimmy and the other women, Titus seems physically unable to stop confessing his desire to watch the trial precisely as media spectacle; the show registers its appeal, while also insisting that to really be on Kimmy’s side is to resist the spectacle.

In S1E05, Kimmy’s co-captive and best friend Cyndee visits her in New York, and eventually reveals that she’s been using her minor celebrity as a victim and survivor to get the things she wants—free stuff, a job for which she isn’t qualified, and marriage to her gay middle-school crush, Brandon. Cyndee plays up the spectacle—even once resorting to “but I’m a mole woman!” with Kimmy (“I’m a mole-woman!” Kimmy retorts)—for material benefit, and in the end Kimmy is not able to fault her. None of it will give her back fifteen years of her life, after all.

But Kimmy won’t follow suit, either, refusing to take what she calls Cyndee’s “shortcut” to realizing her goals. Instead she’ll scapegoat Indiana as a place full of religious fundamentalists and yokels and leave it behind for New York, an act for which she is frequently, if sometimes ambivalently (e.g. by her half-sister Kymmi) castigated in the show. (The kind of crime she experiences in New York, which is frequent, is never going to be Rev. Richard Wayne Gary Wayne’s particular brand of misogynistic violence, the show suggests.) Cyndee’s lesser, offscreen performance of resilience fades into the background of Kimmy’s greater one, which is the substance of the entire show. As Kimmy tells Titus in the pilot,

Life beats you up, Titus. It doesn’t matter if you got tooken by a cult or you’ve been rejected over and over again at auditions. You can either curl up in a ball and die… or you can stand up and say we’re different. We’re the strong ones, and you can’t break us.

The obvious consequence of that philosophy is that some people aren’t different, aren’t the strong ones, and will curl up in a ball and die. Kimmy’s exceptionality is her unbreakability, and it’s the show’s central spectacle. In this way the show also enacts the spectacle of resilience that it critiques.

And in this sense, too, it brings us back to one of the disturbing consequences of Resilience and Melancholy, which is that while resilience means recycling damage into social capital through spectacle and personal branding, the damage still has to happen for this overcoming to work, and it is real. The dream of neoliberal resilience is that obstacles become opportunities, damage becomes strength. For instance, in the electronic dance music (EDM) that James close-reads to exemplify the aesthetics of resilience, sonic damage is deliberately incited through soars and hyper-fast stuttering rhythms so that a spectacle of repair may supplant it.

That’s certainly one way to read Anita Sarkeesian’s experience: she was targeted with vicious harassment for her feminist analyses of video games, which increased when she began a Kickstarter campaign to fund a new series. Wired then reported, “After posting about the harassment she was receiving, her Kickstarter has grown at an astronomical rate, clocking more than 5,200 backers.” (The harassment, and the donations, have only increased since then.) In a very literal way, Sarkeesian has profited from her damage. But it would be inaccurate—and insidious—to suggest, as a careless reading of James’s argument might, that Sarkeesian herself, rather than the system in which she is embedded, incites that damage, and more importantly still, none of her gains erase the damage. “Anita Sarkeesian” the brand may be able to recycle that damage (and perhaps must), but Anita Sarkeesian the person has to live with it.

Even privileged women and people of color don’t stop being punished by patriarchy and white supremacy; it’s just that they have the opportunity also to advance by it, so long as they will accept an individual solution—”We’re the strong ones, and you can’t break us”—and so long as the breakable, instead of cisheteropatriarchy and white supremacy, can be scapegoated. The cycle of trauma and healing enforced by resilience discourse is a very bad deal for women and people of color, and it’s the best deal on offer. (What do you do when you’re being sent large volumes of creepy personal emails? Shut up and go away, or perform your resilience?) Maybe “females are strong as hell,” but maybe they shouldn’t have to keep proving it over and over by surviving, and recuperating, damage. And this is one of the complex and disturbing implications of Resilience and Melancholy that I would have liked to see pursued further on the page: how does one critique the practice of resilience, while also registering the damage that resilience constantly absorbs? (I haven’t gone into James’s version of melancholy here, but I don’t think it quite gets at the question I’m posing here.)

In Unbreakable Kimmy Schmidt, Kimmy undergoes an experience whose status as trauma would be difficult to dismiss (in the way that online harassment has too often been dismissed). For that reason, Kimmy’s experience manifests not only in goofy out-of-date pop culture references but also in nightmares and frightening, violent sleepwalking episodes that signal that the show does not consider Kimmy’s trauma overcome—not yet, anyway. Perhaps this is harm that can be avowed as harm (not a challenge, not an opportunity) after all.

Unbreakable Kimmy Schmidt is also all about passing. Hugely so. Maybe someone else can write that post.

In Autumn 2021 I will be visiting New York, New Haven, Philadelphia, Baltimore, and Washington, D. C. for research.